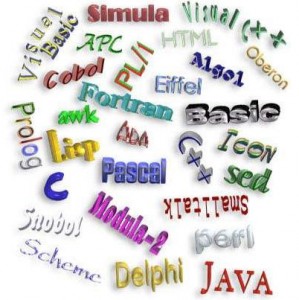 Over the years several programming languages have appeared on the scene and some have stayed the course. The first programming language to hit it big commercially with business applications was COBOL in the Mainframe days. This was followed by C and C++; when the client server era came briefly, Microsoft launched VB, VC++. The arrival of the web spawned several new languages such as ASP, Perl, Java, Cold Fusion, Ruby, C#.

COBOL still has its forte thanks to legacy applications and IBM. C/C++ has always retained its stronghold – engineering and embedded systems.

On the web front, which has seen enormous applications and innovation, a few languages stand out in terms of popularity – Java, Microsoft .Net (C#/VB.net), PHP, Ruby (on Rails).

How does one decide which language to use? A lot of factors come into play, some of the key ones being:

If you are an established enterprise, a lot of times this is dictated by existing environment, if you are an IBM/Sun/Oracle shop you are probably going the Java/J2EE way. Most large enterprises have chosen to go the J2EE route mainly because of its non-proprietary nature, the support from several vendors and its first mover advantage as a robust enterprise platform for the web. If you have been a Microsoft factory, the choice is obvious. Microsoft does particularly well with mid sized companies and in several non-US markets. PHP and Ruby seem to be going head-on and competing in similar segments. Startups and newer companies do not have legacy overheads and hence are free to choose any platform. Also when the hunt is for the best fit COTS product or solution rather than a bespoke application, programming language becomes secondary and more a consequence than choice.

In summary, the field has narrowed down to a few languages, each of which has its niche and application areas. The consumer now has some stable choices to pick from; it is a good time and setting to be in!